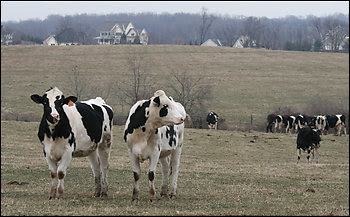 Rather, sell the McMansion, at least according to this article in The Atlantic Monthly. According to the article, studies show that America's love affair with far flung suburbs may be coming to an end, and further, that the McMansions of today will be "the slums of the future." The author of the article - Christopher Leinberger - argues from evidence showing that people increasingly prefer to live in more densely populated urban settings, which he believes signals a reversal of the "Great Urban Escape" of the past fifty years. While Leinberger stresses real estate patterns that back this up, and concludes that there are aspects about more dense urban life that people prefer, it could be argued that the growing abandonment of the exurban future slum is less a matter of pure consumer choice than grim necessity. Of course, there are plenty of stories that rehearse the terrible toll of "extreme commutes" that typically absorb three or more hours of a person's waking hours, but increasingly even this "choice" - unpleasant as it may be - is becoming untenable as commuting costs inexorably rise and the worth of far-flung houses continues to plummet. The American dream has become the American nightmare - so much so that America's newspaper of record can un-selfconsciously lament the fact that Americans who owe more on their houses than they are worth - now over 10% of houseowners - are "trapped in their homes." One might imagine this phrase applying in the case of flood or fire - but "trapped in their homes" due to falling prices? Is this an misuse of the word "trapped," or perhaps more likely, an indication that we should start to be more careful about how we use the word "home"?

Given what we know about these houses - their poor construction and shoddy materials - it's even doubtful how long these slums will even last. Urban slums often developed in housing that was sturdy and held up even in the absence of upkeep and investment. What of those endless tracts of housing of subpar materials - plywood and drywall and 2x4's that aren't even 2x4 anymore - basically everything except the granite counters in the kitchens that are barely used? Writes Leinberger, "by comparison [to the well-built housing stock of urban slums], modern suburban houses, even high-end McMansions, are cheaply built. Hollow doors and wallboard are less durable than solid-oak doors and lath-and-plaster walls. The plywood floors that lurk under wood veneers or carpeting tend to break up and warp as the glue that holds the wood together dries out; asphalt-shingle roofs typically need replacing after 10 years. Many recently built houses take what structural integrity they have from drywall—their thin wooden frames are too flimsy to hold the houses up." If slums in the exurbs are truly a-borning, it's likely they won't last an exceptionally long time. If studies like these, and what much evidence points to be inexorable energy increases, hold true, then we can expect some of our most coveted housing stock to be uninhabitable within a generation, maybe less.

Meanwhile, The Washington Post reported a story on the last dairy farm in Loudon County, once a thriving agricultural area, now an endless vista of McMansion housing tracts. The story featured the Dogwood Farm, run by a family whose ownership of the farm can be traced back continuously to 1847. The story depicts the hard life of dairy farming, but too, its dignity, yet about it is the air of inevitability as changes wrought by modern settlement patterns appeared to be unstoppable. The article quotes one farmer who sold two dairy farms to say, "You can't live in the past. You love this farmland, but people need places to live."

True enough, but those places may not ultimately be in Loudon County. Even as the prices of McMansions decline, so the price of milk is rising due to rising material and energy costs (bought a gallon of milk recently? Everywhere I've looked, one costs more than a gallon of gas). At some point I wouldn't be surprised if it were our McMansion debtors who began selling out to the dairy farmers. Wouldn't that be nice for a change?
Posted by Patrick Deneen at 9:56 PM

The shift in more balanced communities is definitely a good thing for society, the environment, and possibly the economy. But I don't think we should kid ourselves about lower income families ever being able to buy in to an urban environment unless there is government involvement (rent control, caps, etc.). Is that something we really want?

What's worse, since many cities and towns lack a capable public transportation system to service the outlying areas, the "gentrification" of urban space will place the costs of suburbia (automobile, insurance, etc.) on those least able to afford it.

I'm not sure that there is any just way to undo the damage done by the last 40 years of short-sighted thinking.

Yes, it would be nice, if the dairy farmers would consent to going back to that life style! We certainly haven't made it easy for them, that's for sure.

Massive agricultural production on a behemoth scale is not an acceptable substitute, though, as we keep discovering in the form of various disastrous "outbreaks" of one sort or another.

We can only hope that the real farmers will still be around and willing to step up again.

Things went wrong when housing started being thought of as "investments", instead of just a plain simple home, or shelter. When people built homes to spend their lives in, they built to last. People often stayed in a family home, most or all their lives. Many people still have"an old home place" in thier memories. The other thing that amazes me, constantly, is, how for all our supposed technology, and the new materials available, we cannot build houses, or buildings for that matter, nearly as handsome as our ancesters did. Somehow, in the last half of the 20th century, we forgot how to design sturdy, elegant housing. Even a 1920's era bungalow, worker housing essentially, have more sturdiness, and elegance built into them than most modern housing does.