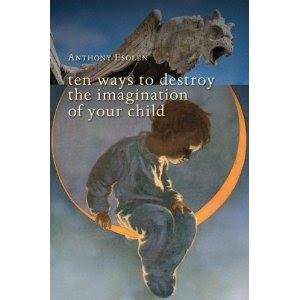 For parents, parents-to-be, children, children-that-were, and anyone else:

I'm devouring this book since receiving it a few days ago (a guilty pleasure amid a pile of papers to grade); it's a marvelous, delicious exercise in irony in which Esolen (one of our greatest literary scholars) purports to recommend a series of exercises by which parents can destroy their children's native and capacious capacity for wonder, imagination and faith. For my money it's the best faux self-help book since The Screwtape Letters.

Among the ten ways you can destroy your child's imagination are:

If that's not enough to entice you to give this book to a loved one (or better yet, ask for it from anyone who will give you a copy), here's an excerpt:

"Consider the problems of the poor fellow who has to manage the Human Warehouse, the faraway, sprawling school, stocked with hundreds or thousands of pupils. In the old days, let's say in a one-room schoolhouse, you could easily pick out which young lad or lass was blessed with a mischievous eye and a lively mind. They were the ones hanging upside down from a couple of planks nailed up on a tree in the schoolyard, or sticking bubble gum on the radiator, or reading Ivanhoe. So you got them a few more planks and a bucket of nails,or a paddle to the rear end, or Waverly. They could be dealt with. But the bigger the school, the more dangerous and upsetting a single act of imagination can be. The necessity to impose something like order rules it out. A vast enterprise like McDonald's can only function by ensuring that no employee, anywhere, will do anything sprightly and childlike in the ways of cooking. I sometimes think that if a single boy at the grill tossed paprika into the french fries, the whole colossal pasteboard empire would come crashing down. Barbarians everywhere would be grilling the onions, or leaving the ketchup out, or commandeering the Swiss to take place of the American. The great virtue of McDonald's, that of the solid, dependable, inert routine, would vanish. As in what was once called 'life,' you'd never know what you were getting."

Buy it and let imagination roam free, as God intended, and as Christmas beseeches.
Posted by Patrick Deneen at 10:57 PM