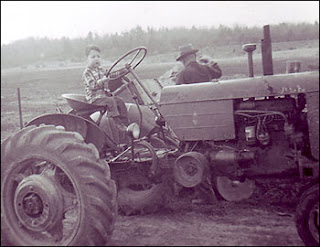 On June 6, Virginians have the opportunity to vote in the Gubernatorial Democratic primary. To my mind, the choice could not be clearer - there's the vote for Clinton political operative Terry McAuliffe, conventional Democrat Brian Moran - two Northern Virginians - or Creigh Deeds, a Virginia native from rural Bath county with longstanding generational ties to the State and a story that suggests strong ties to and sympathies with people for whom home and place are central to their self-definition (rather than position, wealth and mobility). The Washington Post endorsed Deeds the other day - in some ways, a surprising but admirable choice - for his willingness to make some hard decisions that sought to take into account the common good of Virginia. For once, there seems to be a real choice in an upcoming (primary) election.

Two stories in today's Washington Post confirm my suspicions. The first is a background story about Deeds' life, which chronicles his rural background, his long roots in the Commonwealth, his background as a farmer and a hunter. I particularly like the stories of his time in college (where he met his sweetheart and eventual wife), particularly the detail regarding the fresh venison he was able to provide to grateful classmates. He admits to fearing "the perception that some of the conservative values common in rural America are out of sync with the Democratic mainstream." This is a rather amazing concern, given that it was these rural values that was long one of the mainstays of the Democratic party. That this background may now be a liability - particularly given the growth and dominance of Northern Virginia in electoral politics - is a sad statement of the disconnect of the Democrats from the deepest roots of their own commitment to a kind of civil and economic equality (not simply a devotion to meritocratic upward mobility - a system that results in profound inequality). It was in defense of these sorts of homespun values that the party originally was created by Jefferson, against the specter of Hamiltonian commercialism.

By contrast, there's a story on Terry McAuliffe's efforts to buy off Ralph Nader during the 2004 Presidential election. McAuliffe does not deny the story that he tried to pay Nader - using DNC funds - to remove his name from contests in 19 battleground states. If this action was not strictly illegal (and there's no suggestion that it was - surprisingly - though it wouldn't matter, since Nader turned down the bribe), then it's surely damnable. McAuliffe exhibits many of the most egregious qualities of the Clintonistas, above all, literally the desire to win at any cost. As Mark Plotkin averred the other day, while Deeds and Moran have shown a devotion to constituents in the state of Virginia, McAuliffe has shown felicity in one thing - raising money by leaning on potential beneficiaries of a Clinton presidency. His motivation seems to be personal glory and political upward mobility. Surely he could care less about putting in his time in lower offices; instead, his first run will be for the Governor's office, surely with an eye out for bigger and better things.

Could there be a more obvious choice on the ballot - between someone for whom it's easy to imagine that the Governor's office would be the fulfillment of a lifetime's devotion to a place and the fulfillment of obligations and gratitude to a State that made him who he was; and someone for whom the office is clearly a stepping stone to the place that really counts for him - Washington D.C.? I hope that Virginians eligible to vote in the coming Democratic primary will look closely at these candidates - their character and reasons for seeking highest State elective office - and vote accordingly.
Posted by Patrick Deneen at 7:48 AM

I'll be voting for Deeds in the primary, but when it comes to policy, I have trouble seeing anything very conservative in him other than his position on guns. He's wedded to state solutions for problems; he's a typical liberal on bioethics issues. It seems that much of your post deals with issues of identity politics, which, although not totally irrelevant, are often a way of spinning voters.

Anon,
Thanks for this. I do have my misgivings, and you've gone to the heart of those.

I have some hope - perhaps wholly misplaced - that if and when enough of these sort of "yellow dog" Democrats continue to be elected, there will be a recognition that consistency in social and economic policy is a logical conclusion. I think there's a deep inconsistency in both parties right now, and I - for one - would favor a party capable of bridging it. If one sees such potential at all among Democrats, it's more likely to happen at the local level, though - as you point out - there is some way to go.

By the way, I would resist the idea that a person's background and biography - especially one as deeply rooted as Deeds - is a form of "identity politics." Identity politics - what one sees especially in the Sotomayor nomination - is almost exclusively limited to certain biological or ethnic features that are salient because of their socially "disadvantaged" status. Consider this - why isn't anyone (including Sotomayor) suggesting that her Catholicism is central to her identity, and will be influential in her jurisprudence? Can you imagine the firestorm if she (or any of the other Catholic justices) were to do so? Or if Alito or Scalia had said that their Italian-American heritage was relevant to their jurisprudence? "Identity politics" has traction to the extent that it's accepted by the Left as a politically acceptable ascription. The ascription is supposed to tell us something about the person, but in fact is only to be understood as a marker of disadvantage. That is, the "identity" is acceptable due to ascribed status, not embedded cultural belief. By contrast, Deed's biography tells us something about who he is - not because of political ascription due to disadvantage, but certain values that inform his worldview because of his upbringing. Biographies are useful to that extent, but shouldn't be confused with the particular form of "identity politics" that predominates today.

I agree that a candidate's biography is relevant to our evaluation of them, but this Washington Post article, by itself, is pretty thin gruel with which to arrive at much of a conclusion about Deeds. It seems to mostly have to do with the connection between his background and his style of campaigning, which is not nearly as relevant as how his rootedness has manifested itself in his actions as a public servant (rather than as a candidate).

Patrick,
Thank you for responding so thoroughly. I think Judge Sotomayor's discussion of her background as a Latina was rooted in the culture whence she came as much as in racial status. What are the values we see from the Washington Post article?

I guess I was thinking of identity politics as someone's identity being a signal of their values/policies/philosophy (or even as proof of their suitability) rather than looking at what they actually have said or done.