The Washington Post has run a lengthy article rehearsing the origins of the financial crisis, particularly the chicanery and incredible conflicts of interest involved in the packaging of toxic debt in order to appear like sound investment vehicles. At every level the greed and willful suspension of disbelief coincided to create a grand mutual conspiracy of self-deception. Investment firms under pressure to perform, and in the pursuit of quick and easy profit, aggressively peddled this new product. "Investors," eager for outsized returns and asking few if any questions (until it was discovered that they were holding worthless bonds), eagerly dumped massive percentages of their funds into these vehicles. The government was only too eager to look the other way, pleased that these vehicles were the means for many people to purchase houses - whether or not they had any business holding mortgages that could not be repaid in the (likely) event that the housing market ceased its upward rise. Lenders were only too happy to generate these loans, collecting the fees and immediately selling them upstream so that the consequences were off their books. Borrowers believed that they could get rich quick - seeing the incredible (i.e., "not to be believed) rise in housing prices, they were willing to take loans on terms that that they could not realistically repay, on terms that often appeared reasonable (interest-only, teaser-rate, variable loans that promised low monthly payments for a few months, and the consequences be damned after that.

At the moment various story-tellers attempt to craft narratives that will fix the blame on one party or another - Wall Street, Fannie Mae, the government, speculators, people who overreached in taking on oversized mortgages, etc. - but what we should acknowledge is that nearly everyone was involved in some way, at some level. There was a confluence of interest, all revolving around the great American dream of getting rich quick, painlessly and without cost. A self-induced fantasy overrode good sense and old lessons that previous generations once admonished younger and over-eager young people to heed before acting rashly and without thought of consequence. In this case, however, it was many of our "wisest" people - political and business leaders particularly - who set a tone of irresponsibility and unreality. We have ourselves to blame, though that narrative doesn't produce satisfying winners and losers, or victims and predators.

It was a toxic and short-term bubble of an increasingly bubble-ridden economy. The immediacy of the various bubbles - their frequent inflation and violent puncturing - obscures a more fundamental truth that our frantic efforts to deal with the near-constant inflating and popping of smaller bubbles obscures. That is, the entire economic system, and its deepest philosophical presuppositions, is itself a gigantic fantastic and fanciful bubble. Its deepest basis rests upon the idea that it is possible to achieve infinite and permanent growth on a finite and limited planet. From the time of the industrial revolution - when we began extracting and utilizing various fossil fuels for the first time in a sustained fashion aimed to revolutionize world civilization - we had set ourselves on the course of the ultimate bubble. While we experience the jarring ups and downs of daily and annual economic turbulence, the overarching trend of the world economy since the industrial revolution has been upward, as a simple glance at the Dow stock chart since the turn of the last century will indicate: 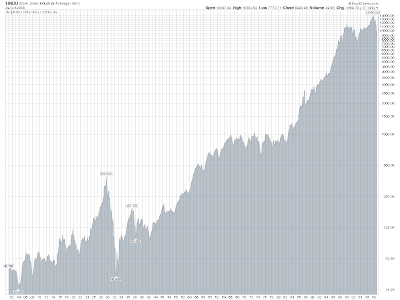 Our entire political, economic and social system is based upon the idea that this line - notwithstanding temporary ups and downs - will continue its upward trajectory forever. The recent efforts of the worlds' governments - whether called "conservative" or "liberal" - has been to reinstate the upward climb of economic growth at any cost, whatever the later or ultimate consequence. Every aspect of our society is premised upon the permanence of this growth - the infinite inflation of the ultimate bubble. We have in all likelihood extracted as much of the most potent and most cheaply accessible forms of energy in fueling this upward climb. As a consequence we have generated the greatest amount of the fungible form of that energy - money - in world's history, and subsequently sought ways to put it to work in spite of the obvious depletions of our planetary bounty. Like a man climbing a mountain who refuses to acknowledge that he is at the peak, like a cartoon character we have used past momentum to ascend higher than the ground, hanging for a short time suspended over a nearly bottomless chasm, and now find ourselves plummeting downward in a cascade of unraveling finances that was in part precipitated by the encounter with energy depletion. We are experiencing the mother of all forms of economic entropy, having dissipated the greatest concentration of planetary energy (short of fusion, which seems to be exclusive to the sun) and unleashing a resulting entropy that is enveloping the globe with no less comprehensiveness and universal impact than the ascending form of "globalization" and "wealth creation."

I cannot say whether this represents the final peak on our ascent of the mountain of modernity - or whether we will find that this is but one severe and violent valley that we can expect to be a frequent occurrence as we near the top - but if we are not at the point of our decline from the peak of modernity (which I think to be a very real possibility), then we are closer today than we were a day ago and much further along than that time a mere century-and a half ago when we began our ascent. Only those who believe that humankind can create a balloon of infinite elasticity can believe otherwise. And unless we reflect on this path, we will find ourselves facing a precipice of dizzying and incomprehensible height and with so little oxygen remaining that it will elude our capacity to find a footing as we descend. While we act like Chicken Littles looking for a way to suspend the sky, we ignore the reality that the sky only appears to be falling because our Babel Tower grows higher, and more precarious, with each passing day.
Posted by Patrick Deneen at 9:12 AM

And we - "humankind", as you call us - if not careful will likely become the arrogant Nimrods we are - Nimrod being the perfect moniker for any reference to Babel - deceiving ourselves that the inevitable descent from the peak will be of our own doing, our own mistakes, our own failings - call it anything other than sin - rather, of course, than the judgment of God Himself which is what brought down the original Babel. Thus, thinking ourselves to be wise, we become fools. Again. God is not mocked, and He'll see that no man - or nation - will boast before him. Forgive me for bringing in Scripture nad History into an academic conversation.

Good post as usual. Well said, troubling and difficult as it may be to accept.

Most people respond to this with the confidence that we'll find another source of energy - but it's been about a hundred years since we found the last one (fission). I expect the resource wars to start in earnest in about a decade's time

To allude somewhat to your recent post on Huckleberry Finn, isn't blaming "them" (whoever "them" are) for our financial crisis a little like blaming the King and the Duke for swindling a gullible public with such nonsense as the Royal Nunsuch? For everyone who was selling there was a public willing to buy. As I recently related to a class, the King and Duke are confidence men, meaning they play on our confidence in them. They do this by telling us what we want to hear. When we first meet them, one has been selling people a product to take tartar off of teeth (along with all the enamel) while the other has been performing a temperance revival. In other words, they are selling something people dearly want, thus are willing to believe virtually anything to get that something for what appears to be nothing. You can't sell immoderation to people who truly value moderation. In short, while our elites, political and economic, deserve blame, so do all of us who had confidence in those who told us we could have something for nothing.