The failure of Lehman Brothers today was the first instance that the public treasury was not used to "backstop" a large financial player since this crisis rose to public awareness in summer 2007. The market was allowed to do the work that its proponents demand most loudly when its trend is upward. Today the market plunged over 500 points out of fear that the entire financial system would unravel. The fear is not that several thousand people at Lehman will be out of work; rather, the fear is that numerous financial institutions that held Lehman-backed securities will in turn face the prospect of failure. While banks have been failing at increasing rates, it's possible we have only seen the beginning of a wave of failures. There is the prospect that numerous money market funds will begin to "break the buck." [Update - the first money market fund with Lehman connections fell below a dollar today, September 16. I don't think it will be the last]. With the financial system locked up, there will be little money for mortgages and a corresponding further drop in housing prices as desperate sellers compete for fewer eligible buyers. Cash is king - if cash is understood to be gold. Gold rose $25 an ounce today, among the only asset classes to rise amid the turmoil.

A complex set of phenomena led to today's rout - a rout that has been building for years, and which erupted today only because the market was finally forced to face a reality without taxpayer dollars to cushion the blow. An unsustainable accumulation of debt, overleverage by consumers and financiers, a bubble in housing and shoddy lending practices, stresses in the system that were exacerbated by high energy prices, rising inflation and rising unemployment. In a day, billions of dollars ceased to exist - 900 billion by one estimate on the front page of today's Washington Post. Those notional dollars are no longer. The nation is considerably poorer.

One can see a longer narrative that goes to the heart of our loss of self-governance as a democratic republic. Following the Civil War and truly taking flight in the 20th-century, the American industrial era produced vast amounts of wealth that would had been unimaginable to countless previous generations. Built to a great extent on plentiful natural resources - particularly American and then international oil - the rise of the Dow traces the growth of this American and increasingly international wealth to its peak in October, 2007. 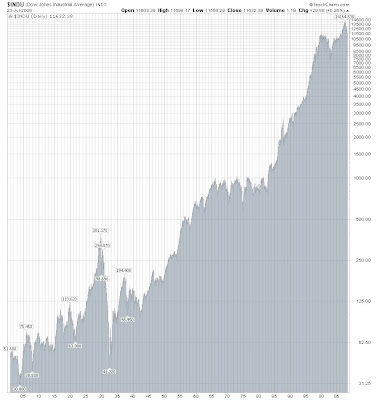 The rise of American wealth was premised on the strength of its industrial production through the 1970s. Until that time, American workers participated in the growing wealth of the nation, giving rise to a comfortable and growing middle class. From that base of widespread wealth arose the belief - at least for a time - that poverty could be eliminated from the world. That moment in the nation's history witnessed the growing belief in actual human autonomy, exemplified in the 1960's aspiration to thoroughgoing liberation and in formalized in law in 1973. The period of the late 1960's until the 1970's was simultaneously the moment of the nation's greatest wealth and the end of an era. In 1971 the nation began producing less oil than in the previous year, a trend that was geological destiny. At the moment of America's most optimistic belief in its financial invincibility - even to the point of transforming the world and all human relationships within it - was the same moment when the nation began its long descent into moral and financial impoverishment.

With its growing reliance on "foreign oil" (a phrase that never fails to amuse me, since it smuggles in the implicit self-deception that denies what we really mean is just "oil"), the nation began a long and sustained overseas transfer of its century-old accumulated wealth. Rather than cutting back - as Jimmy Carter recommended in 1979, the one conservative speech that may have been given in the past 30 years, subsequently called the "malaise speech" - we were ready for a fairy tale. Rather than facing the limits of our domestic wealth and the corresponding need to exercise self-governance over our appetites, we readily grasped at the fairy tale that Ronald Reagan weaved, telling us that it was "morning in America" even as he plunged the nation into massive debt while setting a tone that sanctioned personal indebtedness and generational myopia at the same time. Everyone, regardless of political belief, called this "conservatism." Words had already lost their meaning.

Still, the nation was awash in dollars that needed employment. Without actually producing national wealth anymore, the post-70's era saw the rise of a series of bubble economies. From M&A and junk bond bubbles of the 1980s to the dot-com bubble of the 1990s, the nation's perception of wealth creation became unmoored from reality - perception and belief, not things of value, became the sources of investment wealth. Take, for instance, the "dot-com" bubble: its promise lay in a new form of advertising. In the end, enthusiasm ran high in the belief that consumers would be encouraged to consume more via a new electronic medium. The wealth that would allow this greater consumption? Winning from their sale of dot.com stock portfolios and the greater abuse of credit cards. It was an economy based on pure fantasy, and reality eventually intervened as the bubble popped.

The vulture began to feed on itself, and - in these years of worldwide peak oil - wealth began to be "created" by money itself. The logic of capitalism came full circle: money unleashed the power of money. A larger and larger portion of the American market were financial firms who conjured money out of money. The market made money from itself - meaning that its so-called wealth was increasingly a fiction. 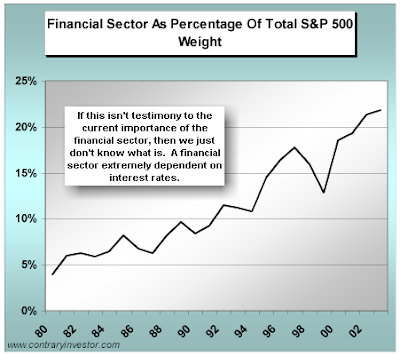 Resembling a grandiose Ponzi scheme, a new last person had to be sought who would hold the bag of debt. The American "consumer" - already tapped out - was encouraged to take on further debt based on the prospect of ever-increasing housing values. A frenzy of borrowing and lending became the national pastime, to the point that one could not attend a barbeque or cocktail party without hearing about someone's daily increase in home equity. Anyone who could drag their debt-ridden overweight carcass across a lender's threshold was given a loan to buy a house in the belief that housing values could never fall. Bank and brokerage firms saw their stocks rise based on the amount of debt that they generated: absence was mistaken for substance, belief was confused with worth.

Tonight, as I scan channels and read explanations online, numberless narratives look for someone to blame. George W. Bush. Predatory lenders. A craven government that refused to regulate. Big corporations. Big government. Someone. Anyone.

We refuse to consider our own complicity. We started "paying" for things using credit cards. We demanded everyday low prices, and assented to the American military to secure a firesale on the goods of the earth. We began misusing language, like calling fantasy equity sources our "homes." Lemming-like we threw our children into the maw of a meritocratic meat-grinder, desperately seeking to ensure their successful corporate future by enrolling them in the best pre-schools - convinced that only an entry-level job at Lehman Brothers insured a successful life.

The symptoms were countless. The source was a loss of self-government, lodged most deeply in the fantasy that something could be gotten for nothing. If the fantasy continues to unravel - as every indication now suggests - we may re-enter a reality-based world. We will be poorer, but perhaps not in spirit. We may begin to value well and aright. While the world quakes tonight in the fear of plunging values, in that impending fall I see the inklings of a phoenix in the ashes that may arise and illuminate a fundamental truth: things of actual value - whether crafted by human hand or born of human relationships - are the products of work, memory, care, and fidelity. Dazzled by fantasy, we have been blinded to this truth, but a dimming of New York's neon glare may yet make this reality newly visible and even beautiful to behold.
Posted by Patrick Deneen at 8:46 PM

Wow! That says it all, so eloquently and true, about where we are and where we need to be.

I'm new to this -- much to like here. You've read Bacevich's latest, I trust?
-- sglover

"We refuse to consider our own complicity. We started "paying" for things using credit cards."

To a certain extent I agree, but really this took off because the economy needed to paper over the fact that incomes for workers were not rising yet housing and other necessities kept going up. Instead the bulk of the returns went to tax advantaged capital gains. It was the last gasp to hide the fact that Reagan's 'trickle down' bs was just that.

Who is this "we" you are talking about? Plenty of idiots in any country, doesn't mean the core isn't sound. Get rid of the fed and the non-idiots remain unaffected (as they do now too for the most part).

This article essentially papers over the real issue.

Reverse this trend and the problem goes away. Back in the 1950's and 1960's interest rates were low, but debt creation was much more measured, stock bull markets more sedate and there were no real estate bubbles. Of course tax rates were much higher.