Sarah was ... well, amazing. It was the manliest speech of the evening.

But, it was Palinly obvious that she would kill. The Left's effort to destroy her before she could speak a word, using every weapon available - including impugning her ability to be a working woman while raising five children, or most recently Harry Reid calling her speech "shrill" - was a glaring "tell" that they knew she was a HUGE threat (see Yuval's righteous anger). She embodies a threat not only to Obama's coronation, but - more profoundly - a threat to the basic worldview of the bi-coastal Left.

She is a woman who has achieved power and success but hasn't signed on to the feminist agenda, being pro-life, pro-family, pro-traditional marriage. She COULD have escaped from small-town life, joining the strip-mining operation by which promising human raw materials are inserted into the upwardly-mobile stream that conscripts footsoldiers in the international army of cosmopolites - and refused to do so, even when achieving state-wide and even national success while refusing to repudiate the small-town values that formed and inform her. She seems like the modern incarnation of the old Anjoli commercial - making the bacon and cooking it in a pan - whether in pumps and a skirt or a hunting or fishing suit, or simply sitting on a big motorcycle - while delivering a hammer of a speech while her youngest daughter smooths the hair of a special needs child that most Americans would have aborted. Wow! 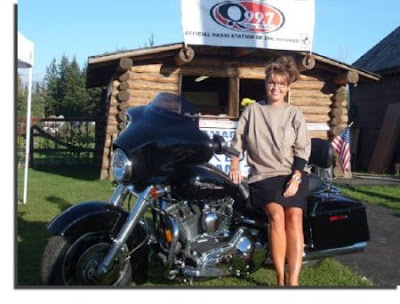 Above all, she was able to make the genuine case against Obama's effete elitism. Hearing Mitt Romney attack the "East Coast elites" almost made me blow chow. Rudy G. posing as a populist small-town mayor was laughable. But Sarah - when she noted Obama's habit of speaking one way to people in Scranton and another way to people in San Francisco - well, that was something she KNOWS something about. She's had to live it in all its ferocity from his surrogates for the past week, if not from the broader society her whole life. During this past week the bi-coastal Left has revealed all too clearly what it thinks of small town folks in its treatment of Sarah and her family (and it still goes on, incredibly enough). They can overlook the inexperience of a cosmopolitan, but not a small town gal. Especially a small town gal who, by all rights, should be liberated. How dare she not be!! It's time to put on the back burner the question of experience (it turns out Governors and Senators of small states can be effective Presidents), and to raise the question of what is being valued, and what is being repudiated, in the worldviews of the candidates (and it now seems to be an Obama v. Palin race, amazingly enough...). On that score, Sarah will be spending a LOT of time in Ohio and Pennsylvania. And the crowds will be Obama-like in their immensity, albeit without bitterness toward God, guns, or Sarah.
Posted by Patrick Deneen at 12:34 AM

Patrick, it was a speech.

Dan, yours is a very odd and worrisome claim. Speeches don't matter? Even if written in concert with a speechwriter? The words a politician is willing to publically utter are somehow nugatory if they were crafted with someone else?

I worked for two years as a speechwriter. You work closely with the speech's interlocutor, crafting multiple drafts, going back and forth, adding, deleting, editing, sweating, staying up nights and holding an endless series of meetings (especially for the big speeches - like this one). To suggest it was "just a friggin speech" whose words were in no way related to the thoughts, beliefs, and intentions of its deliverer is a very odd conclusion for someone - much less a student of politics - to make.

By the way, Hamilton wrote Washington's "Farewell Address"; Sorenson, Kennedy's famous speeches; Peggy Noonan, a number of Reagan's famous speeches. Do you think we elected Hamilton, Sorenson and Noonan - and that their words ultimately had no bearing or relevance on their Presidencies? A very, very odd argument, Dan.