A lot of people on the Right have been accusing the MSM of picking up their "talking points" from the extreme Left of the blogosphere. Like Yuval, I'm prone to distrust the range of wild accusations about a media that may be populated by liberal reporters but is structurally governed by corporate imperatives, but I was struck by the number of times a variety of MSM commentators seemed to dismiss Sarah's speech as simply a matter of reading off a teleprompter. I was struck because I first encountered this dismissive attack earlier tonight (before the speech) on a posting at "Daily Kos": "She's going to read a good speech, written by professionals, off of a teleprompter, and she'll do so with a smile." This dismissive observation was made again and again by "objective reporters" on the several channels I was flipping between.

The subtext is, "she's just a pretty woman in a skirt who can read. Let's not jump to any conclusions, however, that she can think." Perhaps we are supposed to be reminded that she was once a sportscaster with a 1980s hairdo. I don't recall this particular dismissive observation having been leveled at all, much less repeatedly, against Obama, who indeed used a teleprompter during his celebrated acceptance speech - a speech that was also written beforehand. The one-sided insinuation game here really reeks. And, frankly, it has every impression of being a smear job based on cultural assumptions about dumb, pretty girls. 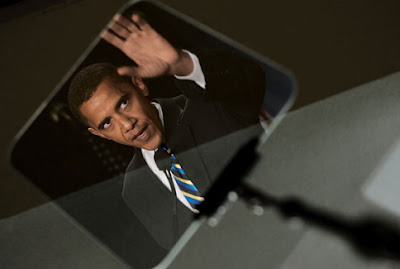 UPDATE: It turns out that the Sarah's teleprompter may have been malfunctioning - and she was unfazed. Go figure!! Now she'll be attacked for being too smooth, I'm sure - like all those pretty girls who seem too polished...
Posted by Patrick Deneen at 1:31 AM