There is much hand wringing today over the fate of Eight Belles, the filly who broke both ankles at the conclusion of Saturday's Kentucky Derby and who was euthanized on the track immediately following the conclusion of the race. Numerous commentators have criticized the sport for its inhumane mistreatment of the horses. It's a charge that I find difficult to credit so long as those critiques are limited to the high-profile deaths of beautiful horses like Eight Belles and Barbaro, while we continue to condone the massive and brutal mistreatment of "ordinary" animals like cows, pigs and chickens in our factory farming practices. 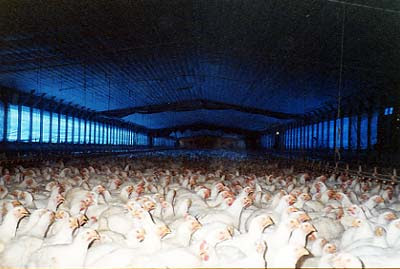 However, I could not help but be struck by several sentences in a column in today's Washington Post in which sports writer Andrew Beyer tries to excuse these high profile equine deaths as the consequence of a set of poor and lamentable developments in horse racing. Sports - like much of modern culture, including finance, schooling, and media - are driven by the bottom line, and above all by the demand to get results immediately no matter what the underlying or deferred costs. So, writes Beyer,

"In earlier eras, most people bred horses in order to race them, and they had a stake in the animals' soundness. By contrast, modern commercial breeders produce horses in order to sell them, and if those horses are unsound, they become somebody else's problem. Because buyers want horses with speed, breeders have filled the thoroughbred species with the genes of fast but unsound horses."

If you replaced every mention of the word "horse" in this passage with the word "mortgage" (along with a few other modifications), you could put this article on the front page of the Business section. Or, you could slightly alter the subject while retaining the basic sentiment and explain much about modern factory farming, professional sports, modern media, economics, and modern education. "Unsoundness" that is eventually someone else's problem is the order of the day.

And what lies at the heart of the problem? Well, too much money deriving from the resource that underlies modern civilization, for starters: "The Big Brown scenario is almost too easy to predict. He'll run brilliantly and be retired in the fall as his owners sell him for stud duty -- probably to a sheik." Countless sheiks now dominate the thoroughbred racing and breeding circuit. The excess wealth they have accumulated by virtue of their tents having been set up atop submerged oceans of petroleum now funds an endless and absurd cycle of breeding and racing, the point of which is to breed ever more fragile animals.

The most basic problem, however, is the ethic of getting something for nothing, or as little as possible. The demand for immediate return makes us willing to cut whatever corners - whether breeding animals whose limbs are so fragile that they easily break; or promoting a sports culture in general that turns a blind eye to the abuses to which athletes subject their own bodies in the name of ever tinier marginal improvements; or encouraging a financial culture that valorizes debt and externalization of costs - leading to a widening set of breakdowns as the rottenness becomes unavoidable. Eight Belles is a sad story, but the bigger story goes undetected amid our inability to see this as a symptom of a deeper and more pervasive problem at the heart of the logic of our civilization.
Posted by Patrick Deneen at 6:49 AM