A report on NPR's "Marketplace" that aired on last Tuesday cites a "senior economist" who states, "More and more people are starting to say, well, do we have a stagflation problem? We're certainly closer than we have been in a long time."

The problem: an economic slowdown, probably induced by the housing bust and the crisis in the financial industry, combined with historically high commodity prices and above all the high price of oil. A.K.A., "stagflation."

What is to be done? The politicians and the Fed alike agree that we are going to have to print money and "stimulate" the economy to avoid the worst effects of a likely recession. However, the problem with "stagflation" is that a solution for one half of the problem exacerbates the other half of the problem - in this case, by trying to pump up the economy, you risk further exacerbating the price of commodities and further sinking the dollar, even potentially setting the table for a more severe recession at a future point in time.

What's interesting is that there seems to be no debate whatsoever whether the better course is to promote economic stimulus and live with the resulting inflation, or to accept economic slowing and retard the declining value of money. There is really no debate - all parties agree, from the Dems to the Reps, from Bush to Bernanke, that the only possible route is to stimulate the economy and avoid what used to be regarded as "the natural cycle" of the economy. Everyone loves a free market except when they don't.

This current assumed solution is in stark contrast with the Fed's policy in the 1970s, when Fed Chairman Paul Volker fiercely fought inflation, even raising the interest rates to astronomic levels that are today almost unimaginable - as high as 20% in early 1980.

Why is it now a point unworthy of debate whether we should be more dedicated to fighting inflation or recession? I'm not an economist, but one suspicion I have is that something fundamental happened in this nation during the past 25 years - that we moved from being a solvent to a debtor nation, both collectively and individually. As this chart attests (previously posted here), in the very years that the Fed was raising rates to all time highs, our national savings rate was around a whopping 12%. 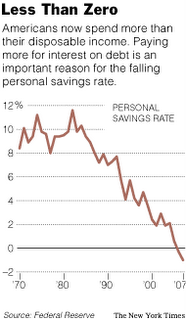 Since that time we have witnessed a steady decline of our personal savings, to the point now that we have a negative savings rate. Our profligacy is manifested both in our individual indebtedness through credit cards and other debts, as it is in our massive national debt to nations that fundamentally now own us - China and oil exporting nations in the Middle East in particular. It's their dollars, and no longer our own, that we are now proposing to effectively devalue to prevent us from feeling a modicum of the economic pain that we experienced in the late 1970s. And, since so few of us have any actual wealth that's not either theoretically found in our houses or that appears on our quarterly retirement statements from one investment firm or another, very few of us have any incentive to argue against the continued inflation of our "wealth." Debtors love inflation, since you get to pay for yesterday's loan with today's cheaper dollars. You prefer to fight inflation when you have something of value to preserve; you prefer to fight recession when "growth" is the only thing of value that's left - i.e., something you don't actually have. The fact that every major agent of our society agrees that "stimulus" is what is needed is a remarkable concession that we're broke. It's only a matter of time before our lenders stop financing our shenanigans - and I'm not talking about our banks, which are cookie-jar raiders numero uno.

The irony here is that our decision to fight inflation during our first encounter with stagflation was directed at a temporary and artificially induced condition of resource scarcity due to an oil embargo in the Middle East. Our willingness now to promote rampant inflation comes at a quite different moment, a time when the evidence grows daily that the world's resources are being strained by worldwide demand and that there is little spare capacity amid our insatiable appetite for non-renewable materials. While we might have erred on the side of combating inflation in the 1970s despite the knowledge that there were sufficient resources to bring down prices eventually, we are now proposing to stoke inflation at a time when we are facing the real prospect of worldwide resource depletion. If our policy then was for the benefit of the many Americans who saved, our proposed path now is for the benefit of a profligate and self-indulgent nation that is unwilling to begin to face the hard reality that we must do with less. Rather than allowing the "free market" to send us the signals that might cause us to heed this sovereign demand - as painful as those "signals" would doubtless be - we are collectively determined to wring the last drops of wine from the tablecloth, to scrounge in the ashtray for the last cigarette butt, to suck on a whitened bone for a bit of marrow, before we are forced to acknowledge that the party's over. By that time, the hangover will be immense - but we're too drunk to care at this point.

Still, it will be an unpleasant morning when we wake up and find there's nothing left in the pantry.
Posted by Patrick Deneen at 11:11 PM

I say we just keep blaming Jimmy Carter. Malaise, yeah, that's what did it.

I can't resist but tie together some of your earlier posts to imagine how things might pan out over the next few years:

1. Because studies have shown sexual promiscuity not only to reduce the incidence of disease but also to dissuade otherwise unruly youth from violence, it will be encouraged as a means of keeping the peace in a period of economic hardship. Pornography will be promoted as a social good, sex education will focus also on techniques for maximizing pleasure, and far more graphic sexual content will appear on TV, billboards, etc.

2. Because violence is enjoyable and shown to produce dopamine (again, according to recent studies), there will be arcades subsidized by the government where people can go play violent games to blow off steam and forget the general hopelessness of their lives.

3. The increasing numbers of people who can not only no longer indulge in their consumerist lifestyles but also have trouble buying the necessities in life will begin to blame and scapegoat the usual suspects. There will be so much internal strife, or our leaders will fear it so much, that they will seek to direct this aggression abroad. Because the large segments of the US population subscribes to the myth of Vietnam revisionism (the war was lost because of corrupt politicians, bleeding-heart liberals, etc.), many people will ask why the government does use its overwhelming military arsenal to get them the things they need and want. As the spook played by Cliff Robertson in _Three Days of the Condor_ says, when people who have never known hunger or need can't heat their homes or feed their families, they're not going to ask the government to go out and get them these things by force, they are going to make them do it.

These realities have already been mapped out by speculative novelists such as Margaret Atwood and J. G. Ballard, and their views are not pretty. In Atwood's Oryx and Crake, the solution is a birth control pill that is also an aphrodisiac, which at the end also releases a lethal plague intended to wipe out human life. In Ballard's Super-Cannes, the new corporate aristocrats emerge periodically from their gated communities to engage in ethnic cleansing, rape, and other crimes in a carefully prescribed regime of violence, designed to maintain their high levels of job performance.

The waiving of taboos on sex and violence in order to alleviate the distress of a sudden and severe economic downturn is the solution that best harmonizes with the capitalist ethic. But such a path cannot help but generate widespread revulsion and disgust, especially among those people who indulge in breaking these taboos, inevitably preparing the way for some sort of authoritarian backlash. But does this mean that the resulting politics will only take the form of punishment - is the only alternative to liberal capitalism and its negative freedom a kind of politics of punishment?

T and S are obvious, but what is PI? It is wages, salary, interest, dividends, rent paid to you, small-business earnings, and (some) government benis.

So, as the boomers age, we should expect the "savings rate" to drop, even if all else if fine and the GDP keeps cranking out wealth.

For example, a retiree spending their retirement (transferring their wealth) drags down the savings rate in a false way.

Excluding retirees adds about 4% to the SR, and this error will only grow until boomers max out the spending of their ill-gotten gains :-).

Another error with the SR is durables (cars, furniture, appliances) as the spending is shown to be at point of sale. Amortizing, what is really happening, pushes saving rate up another 2%.

And another error: housing depreciation is subtracted from income, the opposite of durables. Due to home prices exploding the last decade, depreciation thus does too, sucking the SR negative.

Bottom line: the SR means little or even nothing. A much better look, to my mind, is GDP: how much we produce. And we are still cranking out wealth at maximum speed.

However, I grant you the inflationary trends of all the boomers retiring and trying to spend their cash all at once. Should be lots of jobs in the future.