When most people complain of the high cost of oil, they tend to feel the pain most directly in the cost of filling the gas tank. When we think of how best to mitigate the problem of increasingly limited oil supplies - a truth that has even now been acknowledged on the front page of the Wall Street Journal - we fantasize about the great new gizmos and magic energy sources that will power our engines of the future as we continue to roll out the suburbs by paving over the nation's farmland.

It never fails to come as a surprise for most people to learn how much oil we eat, and that the greatest problem of our post-peak future will not be how we continue to afford our commutes, but how we will be able to feed ourselves. Part of the challenge, of course, comes back to the problem of transportation, and already our initial experience of peak oil is felt through the rising prices of basic foodstuff as the cost of transporting food across the world becomes more expensive. This slight inconvenience to our pocketbooks (putting a crimp in our "holiday shopping") is experienced in a far harsher and even deadly manner by the poor of the world, and already it is being noticed by the mainstream press - in this case, Time Magazine - that high energy costs are being experienced not as expensive commutes by many people of the world, but rather in the form of hunger and starvation.

We in the affluent West should not be sanguine that this is a passing tragedy requiring our sympathy and self-satisfied certainty that it will be solved by a technological fix: indeed, it's our rush to turn food into fuel by means of so-called "biofuels" (so that we can continue to run our suburban "lifestyles") that is contributing to starvation halfway across the globe. More fundamentally, we do better to understand the misery of impoverished humans suffering because of rising oil prices to be a likely harbinger of the future. The problem, at base, goes far beyond the relatively narrow issue of transportation, and to the heart of the modern agricultural system and the question of the carrying capacity of the planet. As was explored recently in an NPR series entitled "Consumed," Jared Diamond notes that humans are now in the midst of a severe case of "overshoot" in which we are exceeding by 30% the capacity of the planet to replenish basic necessities like food and water. In response to the question of whether we have exceeded the capacity of the globe to sustain current population levels, he responded, "of course we are in overshoot and everybody knows that we are in overshoot -- and we are overshooting the things that people talk most about. First thing we're running out of is oil, and everybody knows it. Second thing we're running out of is water. Something like 70 percent of the fresh water in the world is already utilized. Topsoil -- we're exploiting it and it's running off into the ocean. We've already exhausted something like maybe half of the topsoil that was originally in the Great Plains. And then fish and forests..."

Yes, you may be thinking, this starts to sound like Malthus, and indeed there is a neo-Malthusian quality to these concerns. Techno-optimists like to trot out Malthus as a prime example - or prime laughingstock - to point out the absurdity and foolishness of the nattering nabobs of negativism. It's necessary to consider the possibility, however, that Malthus's predictions of starvation resulting from excessive population growth may merely have been delayed by the onset of the industrial revolution (a revolution he could hardly have envisioned, having died shortly before its inception), initially powered by coal and now powered by oil. We must face the rather grim possibility that, as a consequence of the delay - having exceeded by several orders of magnitude the upper limits of actual carrying capacity of the planet, and now no longer having available the massive and growing fossil fuel energy inputs that made this overshoot seem plausible for a time - the repercussions of are likely to be far more severe than Malthus ever could have imagined.

There is a remarkable, and indeed terrifying, correlation between the employment of fossil fuels and a dramatic rise of population growth over the past century and a half (what a flash in the pan!). Here are some rather striking charts that document this close correlation, highlighting in particular the dramatic rise of population that occurred at precisely the time of the exploitation of fossil fuels.

First, a chart that shows the growth of world population from the beginning of the modern era to the present: 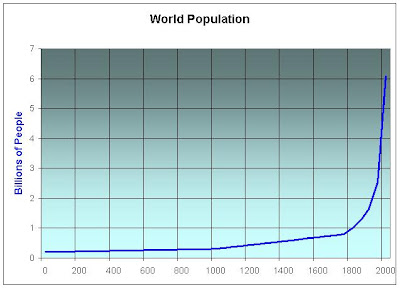 Notice that the world population does not pass the one billion mark until the early part of the 19th century; Malthus dies in 1834, just around the time when the use of coal for powering machinery is beginning, albeit in incipient form.

Second, the same chart with the addition of a line that traces the rise of oil use beginning in the middle-half of the nineteenth century: 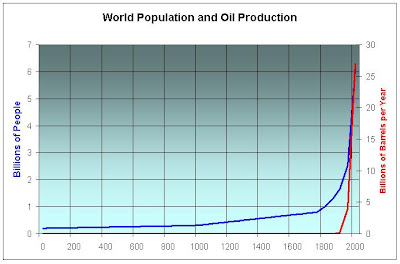 What should strike us about this chart is the sharpness of the upward trajectory of fossil fuel use: typically when Hubbert's peak is illustrated, the time line is much more limited (usually beginning with the use of oil in the 1850s), and one sees a gentle and flowing upward climb and an equally gentle downward slide, a bit like a nice hill perfect for sledding. Viewed from the perspective of several millennia, however, our oil use really looks like a slashing vertical line going straight up, and will - given the same temporal perspective - have a similarly violent decline. It will form a very tight inverted "V", demonstrating how brief our little fossil fuel party will have lasted in the context of human history. How quickly we will have used up these enormous reservoirs of stored sunlight which took millions of years to form and will have been depleted in only several century's time.

Lastly, a chart that details the extraordinary rise in population growth and the rise to the peak of oil production from 1900 to the present: 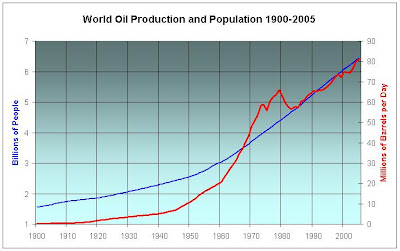 The "Green Revolution" of the twentieth century is a wickedly deceptive misnomer: it should rather be called the "Black Revolution" in recognition of the petroleum inputs that made possible the extraordinary rise of agricultural production throughout the twentieth century. Not only transportation, but the use of petroleum products in the form of fertilizers, pesticides, irrigation, industrial farming and mechanized food processing all amount approximately to the equivalent of 10 calories of fossil fuel input for the creation of every one calorie of food. This self-evidently unsustainable imbalance does not even account for the fossil fuel needed for the transportation of the food, and thus intimates that the severity of the problem we will face is not whether we can drive ourselves to the supermarket or even whether the trucks will continue making deliveries (though, increasingly, fewer will), but whether there will be any food there once we've managed to get our weekly rations of gasoline.

The really scary implication of peak oil is whether there is a corresponding phenomenon of "peak population," and if so, whether the downward slope of the oil mountain will also portend a downward slope of the world's population. If so, that downward journey will be the ugliest and most horrific stage of human history, one that is simply not imaginable to us looking out from the top of the mountain and seeing only endless sunny vistas.

As we prepare for our annual Thanksgiving feast, one whose excess would boggle the minds of our rugged forbears whose fortitude, courage, forbearance and industry we honor and commemorate, we should rightfully be thankful for the extraordinary bounty we now enjoy. However, we should also be mindful of how temporary and precarious this bounty is, and give thought to ways we can begin to feed ourselves that reflect a truer form of thankfulness in cognizance of the limits of planet and our obligations to future generations whose prospects look increasingly dim in proportion to the extent that we continue to gorge ourselves.
Posted by Patrick Deneen at 9:13 PM

A lot of interesting stuff in this post. But, please, save yourself from going off the "too-many-people" deep end. For example,

I would note we began to voluntarily move toward "peak population" when oil was rising at record rates every year. The more oil a culture uses, the more wealthy they are, and the less people they create. The UN predicts peak population right now around 2050 while gobbling oil at record rates. And the lowest TFR people use the most oil. Less oil usage, more kids.

And most important: any way you wish to look at population, the more people, the more wealth. Even before oil, you can deomonstrate that PEOPLE-IDEAS-THINGS are what create wealth. Not resources (heck, Africa and Russia would be the most weathy places if this was true, not islands like Japan and England). Look to human capital (IDEAS) for how wealth is created.

I cannot believe this idea of more people = less wealth is still floating around out among educated people. It makes no sense based on world recorded history (pre and post oil), based on mathematics (Romer showed it to be false over a decade ago), or based on simple common sense (two hands, one mouth).

The largest threat to the world economy is the decline of PEOPLE among cultures who come up with all the IDEAS, or just plain bad ideas (like wasting topsoil, oil, and water, or starting wars). Now that's the real threat to economic growth: bad ideas like population growth = poverty. Save yourself!

The danger of starvation posed by peak oil is, IMHO, overblown.

IIRC, it's not _oil_ that's a sine qua non of modern food production, just _energy_. We currently use oil (& natural gas) for convenience, not necessity. Fertilizer production, transportation, irrigation, crop drying - these could all be done with other fuel sources if need be. Nuclear-generated electricity, for instance - which, between breeders & seawater, is not likely to peak anytime soon - in combination with hydrolysis, electric motors, hybrid vehicles, electric heaters - all of which are known technologies. And if we have some pressing need for liquid fuels, in a pinch we could synthesize ethanol, methanol, or even diesel straight from CO2 & water. (The energy efficiencies would likely be abysmal, but it would sure beat starvation.)

Such shifts would probably be costly, but that's still preferable to famine.

We need to talk. Don't buy into the old population bomb or peak oil theories (though if peak oil were true in the imminent future, it would be very good news). Fertility rates are falling so fast everywhere that by the end of the century world population will very likely be falling, and this may pose a serious social problem. And as for hydrocarbons--there are lots and lots of those around. Hibbert got lucky with his US forecast back in 1969; most subsequent forecasts have been wrong by an order of magnitude.