As I write, the Emmaus Church of Heuersdorf, Germany, is resting for the evening in a parking lot as it pauses on its journey of 12.5 kilometers to a new town. The Emmaus Church was evicted from its plot of land of the past 750 years when it was discovered that it had thoughtlessly allowed itself to be built atop a large deposit of "brown coal," or lignite that is now used to power innumerable Ipods, flat screen televisions, labor-saving devices, and computers so people can read valuable blogs like this one. Following the Church are the inhabitants of Heursdorf, who have also been evicted so that strip mining operations can begin. This Spiegel article celebrates the technological ingenuity of the removal of the Church while altogether overlooking the curious fact that neither holy sanctuary nor human community can be allowed to stand in the way of the expeditious removal of hydrocarbons. After all, we live in a mobile society, so who would blink twice when a Church packs its things for a change of lifestyle? 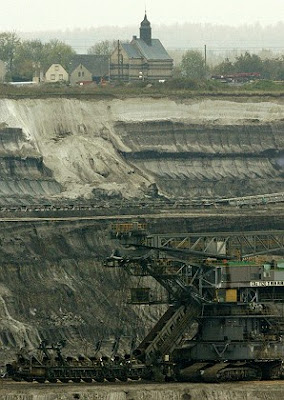 The removal of the Emmaus Church, and the eviction of an entire town, could almost not be imagined if it were not so perfectly symbolic of what our fossil fuel era has done to both the ancient ideals of Religio and Communitas. Our exploitation of hydrocarbons has apparently freed us from the governance of God and our reliance upon a community of fellow humans; the power it has provided - truly godlike power - has made the liberal fantasy of "autonomous individuals" a temporary, if costly, reality. There was a time when the teachings that would take place in such a Church - and which would define the understanding of the community - would have formed the core of a resistance against moving the church and the town. It would be in the Church that one would hear convincing arguments against the reign of utilitarianism, against the embrace of human dominion over nature and God. The fact that it is the Church that is being moved - and not the eschewal of the exploitation of raw materials that fuel modern comforts - is sad proof of the Church's widespread contemporary irrelevance.

The Emmaus Churches and the Heursdorfs of the world will, for a time, continue to be forced to make way, or to be simply destroyed (as is the case of the larger Church in Heuersdorf, and, more broadly, the empty Churches everywhere in Europe and the eviscerated towns throughout America) in the name of progress. Yet, it is those very ancient spaces of gathering - Religio and Communitas - that will be most needed when the lights begin to go out. We will find, however, that they are no longer where we thought we had left them.
Posted by Patrick Deneen at 11:48 PM

Another great post. I'd be interested in reading your take on the Three Gorges River Dam in China - if you have the interest to write about something so flagrantly depressing.

I know politicians regularly over-promise and "10 years" has a nice ring to it, but it's extraordinarily hard for me to imagine any reasonable citizen actually *wanting* to arrange things so that we care nothing for Saudi oil in 10 years. I can really only imagine one way (absent some technological breakthrough - "the fusion-powered Civic!") and that's an economic depression on the order of the one Russia suffered through from the late 1980s through the early part of the century. So what precisely do you want a presidential candidate to propose? What's your 10-point plan (these things are always 10-point plans) for "sacrifice"?

thinking about the name of the church - hope they encounter Jesus on the way. I think he'd be crying with them though.

On the other hand what a fantastic opportunity. The community will be bereft I thik and maybe the chuch can be the hand that connects theirs to God once again. Who knows? God does work in mysterious ways ... but what we do in the name of so called progress -(profit) is shameful!